Notify me when this product is in stock
Add A Review 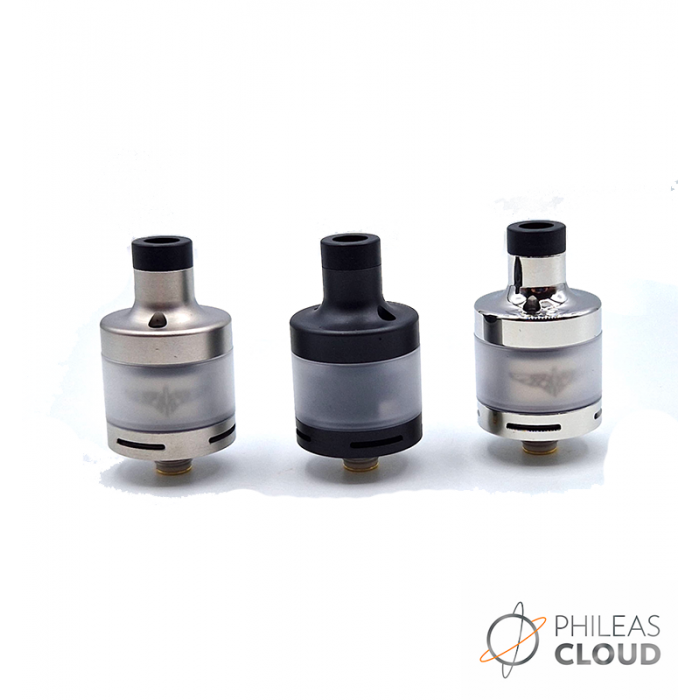 Caspardina RTA - RDTA -SQUONK is the new arrival of GG atomizers' family that combines the Perseus V2 features with new ones.

We introduce you the Caspardina, an atomizer with much more abilities than the Perseus. What it can do? More than you can think, more than can you imagine.

Caspardina is made to give more freedom to the users. It offers side air control and BF option.

1. The exit pin that reduces the air AFTER the resistance, is made in a way for the user not to remove the body and push it to come out, but to only remove the drip tip.

2. The posts on the deck are made like Iatty. They hold all wires, even those with the smallest diameter. The deck also allows you to easily put the wire in place before screw the bolts that keep it in place.

3. The body doesn't come off when you turn it left at the end of the bayonet, to avoid any accidental body separation from the base while you store your Caspardina.

4. The deck has no o-rings anymore that can be damaged.

5. The refilling cap has no slots. It's totally smooth.

6. More accessories are coming with Caspardina standard edition, like new side air pins, new bottom air pins, among other accessories like a special refilling cap, extensions in different lengths and external body to make Caspardina fit on bigger mods.

Starting off with a full description of each and every piece:

Drip tip: Black, small and elegant. The user also has the ability to replace it with any other drip tip in the market.

Refilling cap: The refilling method is ridiculously easy. Contrastingly with atomizers on which you need to remove 2 caps to refill, Caspardina facilitates the process. While there is no need to screw or unscrew any caps, you simply turn the cap either exposing or covering the refilling holes. Consequently, after refilling, a turn is enough to shut the holes. At the same time, you do not have to align the refilling holes of the cap with the holes of the main body, as the cap locks exactly at a position exposing the holes.

ps...... After users' demand, the cap closes clockwise (in the opposite way than Perseus), meaning that it closes when you turn it to the right, like when you screw a cap.

We also added a known way to remove the refilling cap, to satisfy other customers that wanted to know when they had to stop the refilling procedure. So the cap can be fully removed and refill your Caspardina via 2 huge holes.

Removing the cap is a simple procedure. You turn it counterclockwise and pull it out.

Furthermore, there is no reason to align the cap refilling holes with the main body holes because the cap stops exactly to the open position.

Another advantage is that the refilling holes are not slots but actual holes. That way, your bottle stays always steady when you refill without fearing that it will slip left or right, making a mess of liquid.

Main Body: It is made of transparent plastic, trapped between 2 metal parts (the bell and the glass holder).

Extended configuration: Caspardina also carries 3 extentions that allows you to increase liquid capacity. They work like Iatty's extensions, where you screw the extension upon the glass holder, without the need to emply your tank.

Air pins: Caspardina gives you the ability to change the bottom and side air pins to adjust air. It's a technique that Golden Greek invented when Tilemahos Armed emerged and it doesn't require to empty the liquid from the tank or cause damage to the resistance.

The bottom air pins have holes of the following diameters

What air options Caspardina gives you:

GG Caspardina standard package includes the bottom air pins 1,2mm and 3,5mm and the 0 air side air pin, for standard MTL and RTL vaping style. You can purchase the rest of the bottom and side air pins separately to enjoy more MTL options and DL option.

Exit Air Pin: It is widely accepted that air plays a significant role in taste. The taste depends on the quantity of the air as well as the way it hits the resistance. That's exactly why we brought air pins to the market. What is yet not as well-known is that the way that air leaves from the resistance is also crucial, especially on MTL vaping style. That's why we created a pin with a specific air hole upon the resistance. That way, the air will go through a specific hole before it reaches the user's mouth.

A question coming of everything previously mentioned is why the air that leaves from the resistance is so important. That's because depending on the exit pin, the quantity of air that will "hug" the resistance wire changes. That is considered a key factor in change of taste. More pins constructed this way are expected.

You can add or remove this air pin without coming in with the liquid and much easier than perseus.

To remove the Exit Air Pin:

The exit pin sits on the drip tip of Caspardina. To remove it, you simply remove the drip tip and push it out.

To add the Exit Air Pin:

Just push it inside the drip tip without removing anything from Caspardina.

Liquid control: Simply turn the body left or right, and the liquid holes will be either exposed or covered.

Bell: An outstanding feature is the top of the bell, which is much smaller than the rest of the bell's chamber. That way, the moisture concentrates before it reaches your mouth.

Deck: The deck is all of it sandblasted to remove any cnc marks and looks rerally beautiful.

The resistance sits low in comparison with the channels, allowing the wick to be fed more quickly and effectively. The deck has 2 screws that hold the wire in place.

We thought to transform Caspardina into a dripper, by removing the body and replacing it with a new dripper body but........ Caspardina is smaller than a dripper so no reason to do that, especially when it carries the BF pin that works on squonk mods.

Your choices in BF MODE are:

The openings of positive and negative where you put the legs of the wire are not at the same angle. That way you can put your wire much easier in place and/or put longer wires.

You can purchase the following after-sales parts:

Write Your Own Review